Ten things I learned from long-haul travel with my children 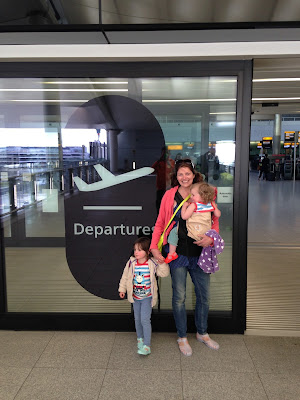 Earlier this year we flew to Singapore to spend some time with my brother and his family, who moved out there at the end of 2014. This would be the biggest and most ambitious trip we'd ever undertaken as a family and that I personally had ever undertaken full stop.

I never really travelled when I was younger, bar the odd family holiday. Noel and I went to the Maldives on honeymoon and to New York for my 30th birthday so travel has featured more in recent years, and we took Cherry to Provence for a week when she was a little baby, but this was the first time we'd attempted anything like this as a family of four.

Our plan was to fly out together and stay with my brother, sister-in-law, nephew and niece. Noel would stay two weeks then fly home and Cherry, Violet and I would stay on. That meant me flying home solo with two children, which felt like an enormous undertaking particularly as I am not the most confident air traveller. I know it's pretty much the safest form of transport but I have never really got past the 'but how does it STAY IN THE AIR' thoughts and I can get quite panicky on flights, particularly during take-off and turbulence.

The trip didn't go exactly to plan by any means. It was however one of the most empowering experiences of my life and I have noticed a difference in all of us since returning home. 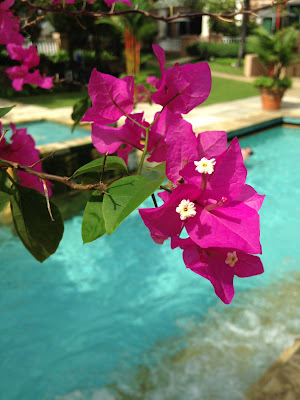 Here's ten things I learned along the way.

1. Know YOUR children
I'd read various 'top tips for flying with young children' ahead of the trip, but I also know my own children. Cherry and Violet are just not the kind of children who would sleep and watch TV all through a 14-hour flight, they are far too energetic and curious. We didn't go overboard with entertainment, treats, distractions and surprises as we were pretty sure the flight itself would be exciting and interesting enough for them. We planned for this and arrived very early for our outbound flight so they could soak up the atmosphere of an airport, explore, watch planes taking off and generally enjoy the new experience.

2. Expect the unexpected
About nine hours into the flight Violet began vomiting. She was sick for a couple of days then our nephew came down with it and was poorly for nearly a week, then Cherry had diarrhoea for a few days, then Noel was sick.
This put a big hold on any activities and exploring once we were in Singapore, but it did mean we got to spend plenty of time with our family and enjoy the condo and swimming pools. We managed to get out and explore later on in the trip. 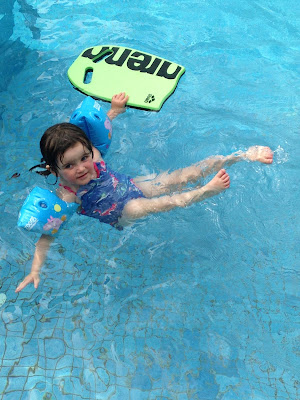 3. Your children may change in ways you don't expect
Both Cherry and Violet seemed younger and more vulnerable in Singapore. They were both terrifically excited about the whole thing and Cherry in particular adored the experience of a new country. She glowed with happiness for much of it and she visibly grew in confidence, and her delight at being reunited with her beloved cousins lasted a good two weeks. Violet was far less independent than she is at home. She was only a baby when her cousins left the country and doesn't have the bond and shared history with them that Cherry has, so she was a little left out and consequently wanted far more time and attention from me.

4. The climate does make a difference
Singapore has a tropical climate and both Cherry and Violet found the humidity tiring. They slept really well, went to bed very easily and slept later than they usually do. Cherry, who is pretty responsible and independent at home, wanted help dressing, asked to go in the buggy and was less trustworthy on roads and in car parks. Violet wanted to be carried most of the time. I took the sling, but I found it hard going carrying her in the 35degree heat and intense humidity. 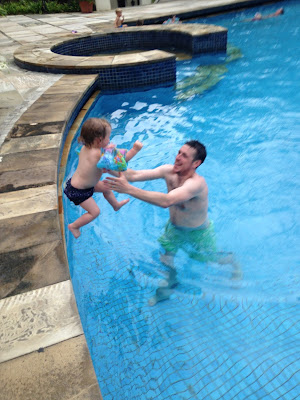 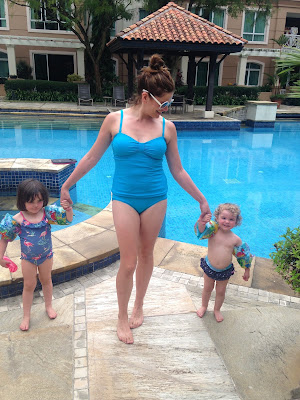 5. It's emotional
Quite apart from the emotions associated with being reunited with family, our big trip brought out emotions in all of us. Good ones and bad ones. In particular I felt more fearful and anxious than I usually do, and much of this was anticipation of the flight home by myself with both children. It really hung over my head a bit, even though the flight over was a resounding success bar the vomiting, and I found it hard to fully relax.

6. It's really hard work
Just two years and nine months separates Cherry and Violet's older cousin and Violet, the baby of the four. Living in an apartment with a one-year-old, two-year-old, three-year-old and four-year-old is noisy, messy, fun and seriously, seriously hard work. There wasn't much in the way of R and R for Noel and I, we managed one lunch out without the children in the entire two weeks we had together. 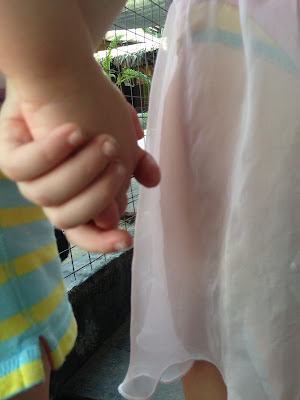 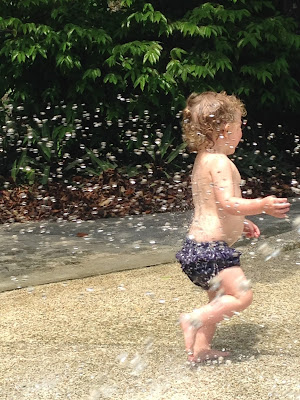 7. It's quite scary
I was so preoccupied by the flight home that I didn't really give much thought to how I would feel when Noel left. After he flew out I felt terrified. Even though I was staying with family, I suddenly felt completely alone and scared of this hot, strange, regimented country with patches of wildness spilling out in unexpected corners. I went to pieces for a few days and Cherry, who is highly sensitive and empathetic, picked up on my turmoil and became enormously challenging.

8. I'm pretty strong
After a dreadful couple of days of challenging behaviour from Cherry, lots of fighting between all four cousins and completely shot confidence from me, I found my mojo again. Cherry by this time was very anxious, with a newfound fear of thunderstorms and a loss of confidence in me, and I found depths of patience, tolerance and courage I didn't know I had in soothing and comforting her. 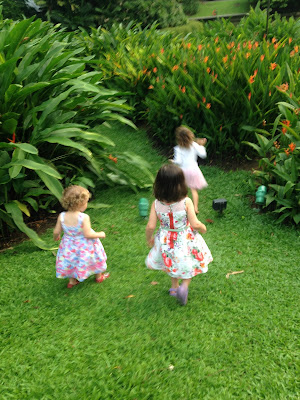 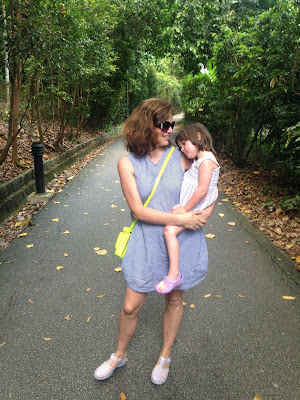 9. Some things are universal
At home, we spend as much time as possible outdoors. We do lots of trips and adventures, but we also spend lots of time outdoors closer to home - in the garden or out playing on our very quiet street and in a wooded area opposite. In Singapore the climate is such that time outdoors is pretty limited with small children unless you're at a water park. The heat is simply too fierce, the humidity too intense, and the country itself, once nothing but jungle, is very urbanised. We spent far more time indoors than we do at home, which felt quite counterintuitive. The more we got outside, to the Botanic Gardens or the jungle or any one of the amazing water parks, the more we all enjoyed ourselves. My favourite day by far was spent at Bukit Timah, a rainforest nature reserve and the highest point in Singapore.

10. Flying solo with two young children is all about your attitude
By the time our flight home came around I was more than prepared. I had had my crisis of confidence and come out the other side, and was feeling pretty unstoppable. I knew all I needed to do was focus on my children and be with them, rather than attempt to distract them with passive entertainment. The fourteen and a half hours literally flew by. Cherry, Violet and I had a lovely time. It was intense and tiring for me, as neither of them slept more than four hours and I didn't sleep at all. We read stories, talked, played games, drew pictures, went for walks around the aeroplane, and just generally enjoyed the experience.
We were sat very near a couple with a nine-month-old baby and a four-year-old, both of whom slept and watched TV for the entire flight. The couple certainly looked well-rested at Heathrow, whereas I suspect I did not, but I am pretty sure I had the better experience for having shared all of it consciously with my children. 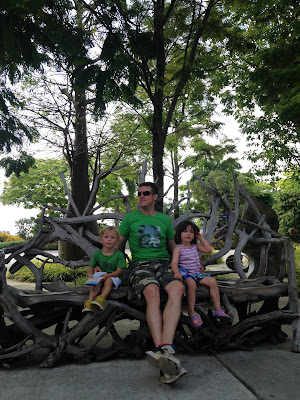 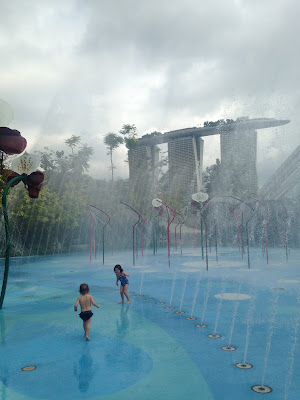 And here's a bonus.

11. There really is no place like home. Singapore is stunning, beautifully lush and abundant, a proud and noble country with heritage and history. The flora and fauna is breathtaking and the climate is pretty hard to beat, as long as you are near a swimming pool or other water source. But there is nowhere like England and flying back across our green and pleasant land really did bring a lump to my throat.

Cherry and Violet took a while to settle back and all of us experienced far more jet lag on our return than we had over there. We had a couple of weeks of staggeringly early starts even by our early standards, before life slowly settled back to normal. Only our trip really has left a mark on all of us. We are markedly closer as a family and we have all grown in confidence.

I feel particularly enriched for the experience, with much more of a can-do attitude and sense of self-reliance. Cherry's thirst for adventure has been well and truly ignited, as has Violet's although I am not sure how much of our trip my younger daughter will remember, at such a tender age.

What's really lovely is that they enjoyed the journey as much as the destination. I love their zest for life and their delight in things that could be seen as so very ordinary and almost tedious.

Every time we spy an aeroplane in the sky I ask where they think it's going and they both instantly reply 'Singapore!' Then Cherry will look wistful and say 'Mummy, can we go back to Singapore?' and I tell her that yes, of course we will go again, and lots of other places too.

This is just the start. 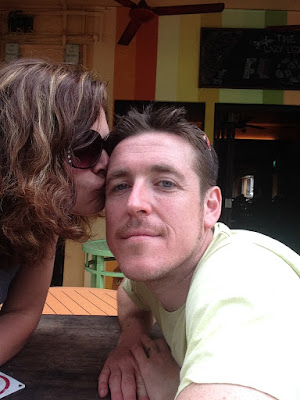 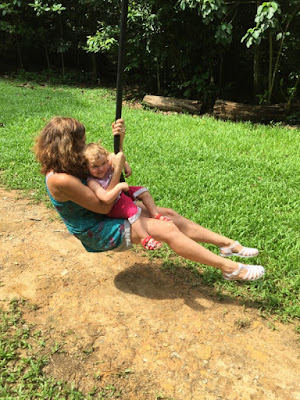 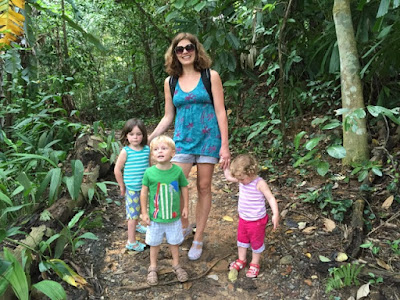 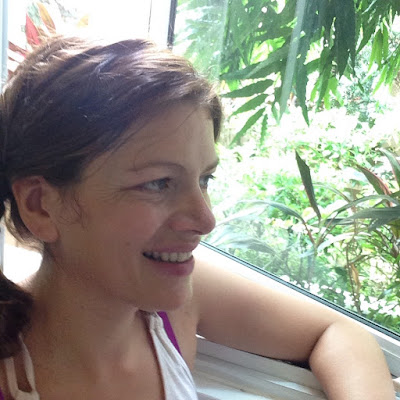