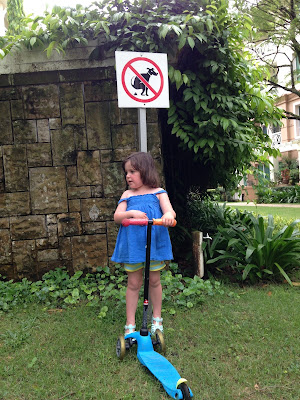 When we were in Singapore Cherry was tickled pink by this signpost, which we quickly christened Don't let your dog have a poo. She wanted her picture taken by it most days. Singapore is quite heavy on signposts, and when we got back she continued to notice them and ask me what they said or meant.

It really reminded me how children can respond to visual or written cues, even if they don't necessarily understand what they mean. As Cherry becomes ever more thirsty for knowledge, questioning just about everything (and I do mean EVERYTHING. Last week we found ourselves watching a Kendo class. If you thought three-year-olds came out with some tough questions at the best of times, you want to try standing next to two of them during Kendo) wherever possible I think the shortest and simplest explanation is often the best. I find we frequently return to discussions around taking care of our bodies, being kind and other general principles to live by. 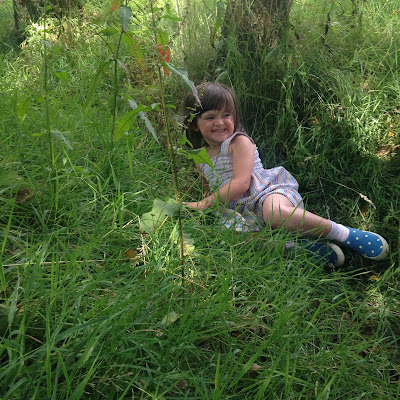 As exhausting as it can sometimes (often!) be I do genuinely enjoy the process of stretching my own mind and becoming more questioning myself. I really try hard to help Cherry find the answers herself, usually by asking her what she thinks then taking her through leading questions until she gets there. Of course often I do have to eventually offer her the answer but I do like her to at least try and tell me what she thinks before I do so.

But there are some things - basic fundamental principles - that I explain time and again that I thought deserved a more concrete place in our conversations.

All of this has led us to write down a few rules. Hand on heart, I never thought ours would be the kind of home to have 'rules' and part of me feels a bit anxious that anybody reading this will now think I am a madly authoritarian dictator with a list of regulations for all who darken my door. Our rules are very simple and relatable, and they apply to all of us - Noel and I as well as the children.

Cherry, Violet and I discussed our rules together and we involved them in the process as much as possible given their tender ages. (Violet in particular had little of actual substance to add but she was at least present during their inception which is as much as any 23-month-old can reasonably expect I think!) I was very keen that our language and tone was as positive as possible - the last thing I wanted was a big list of ''don'ts'' and I think what we have come up with is much more of a list of 'do's'. 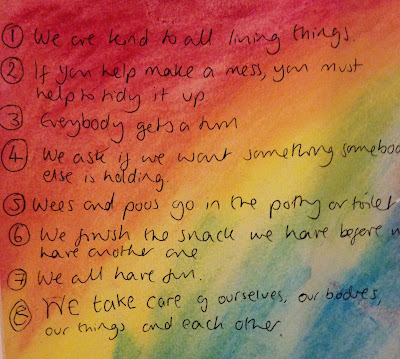 During a painting session I created this little rainbow and Cherry and Violet were very taken with it so we decided to write the rules on it and stick them on our wall. They are there now for all to see. Cherry in particular absolutely loves them. Every now and again, apropos of nothing, she will suddenly ask 'Mummy, what's number six?'

Rule six is in fact the only rule we have around food. I have always been very scrupulous about trusting and respecting my children's natural appetites and hunger cues and have never forced, coaxed or cajoled them to eat. There is no expectation upon anybody to clear their plate, regardless of whether or not pudding is available and nothing is conditional upon anybody 'eating their greens'.

I do however draw the line at providing snacks only for them to be discarded half-eaten, so we insist that they finish whatever snack they have (usually an apple) before they have another one, if they want one. 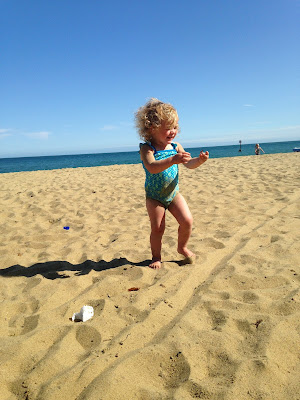 Rule five is not so much an attempt to potty-train Violet as a reaction to a rather unfortunate habit she's picked up as a result of going nappy-free a great deal of the time. Rule seven might seem a bit odd - making 'having fun' a rule? - but it's more to address the point that we all deserve to enjoy ourselves in life and if one of us constantly feels their preferences are not being considered and respected they have the right to raise this. It's also to help the children understand that not everybody will want to play 'that' game for 'that' long so sometimes you must compromise, and that jokes, pranks, games and the like are not actually 'funny' unless everybody is amused. This in future should help with conversations around concepts like bullying and abuse.

I find these rules generally good principles to live by, and having them also neatly side-steps many issues of control and rebellion. Admittedly my children are still very young, but they are both strong-willed and more than a little defiant by nature. Having rules that everybody in the house adheres to makes discipline far more of a democratic process. I think it's easier for both of them to accept 'in this house, we all get a turn' than it is for me to arbitrarily dictate that they must 'share' everything.

Rather than making Noel and I authority figures who must be blindly obeyed, having house rules means we all live by a unanimous contract, and I hope this means we all live a little more harmoniously. It also helps ensure we all know what to expect from one another, and that our communication remains open and democratic. It's empowering for children to feel they have a say and I encourage Cherry to call me out if she feels I have violated one of our rules. She has started, quite rightly, reminding me to 'speak kindly' if I become too animated and in danger of ranting and lecturing to hammer home a point. This feels to me a real affirmation that she knows her voice will be heard.

Do you have rules in your house?