Teaching a child to ride a bike the very, very slow way. 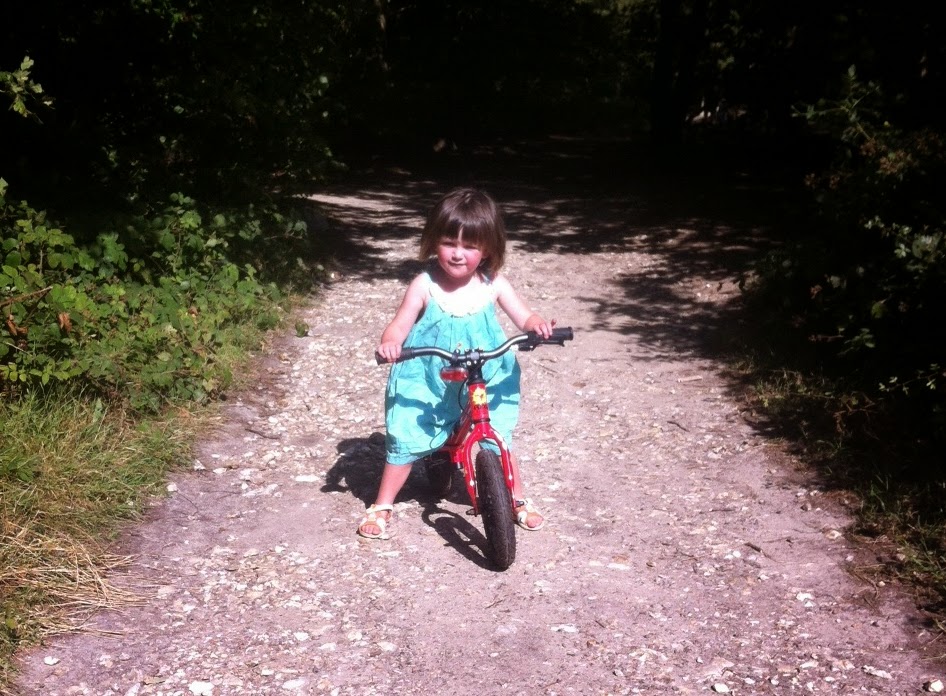 I get asked a lot about teaching kids to cycle, which isn't something I've really felt qualified to comment upon as my children are very young.

(I actually wrote the vast majority of the Girl's Guide to Life on Two Wheels before I had Cherry, and the remainder while Cherry was very young and before I became pregnant with V, so the book itself doesn't cover cycling with kiddies. Expect the follow up The Mum's Guide to Kids on Two Wheels imminently!) 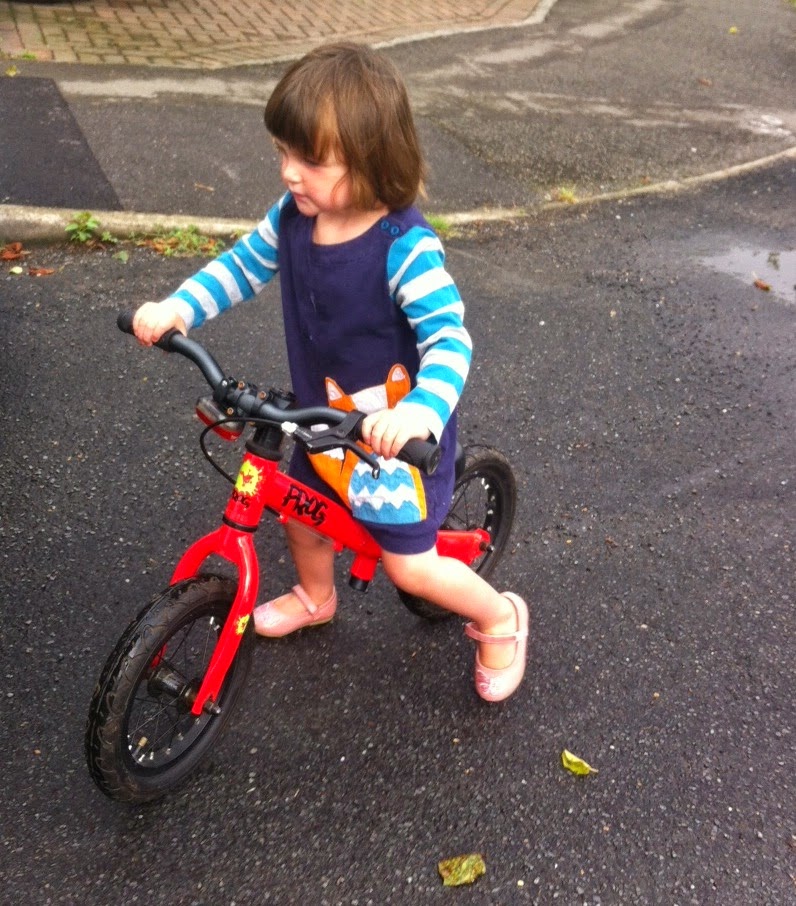 I now have a bit more of an idea around how to go about getting your children on bikes. Here's my advice.

Get them a bike, ride your bike lots - and do nothing else.

Trust me, they will do the rest when they are ready.

About a year and a half ago we were sent an adorable little Frog balance bike. After the initial novelty, which lasted about half an hour, it has been largely ignored by Cherry.

If there's one thing I know about my daughter it's the more I push something onto her, the more emphatically she will dig in and refuse to entertain it. So I have done nothing, just left the Frog conveniently situated, and I have waited.

Cherry isn't the most physical of children, she's quite reticent and it took her ages to become more physically outgoing. This in itself used to concern me as I watched far younger children throwing themselves around playgrounds while Cherry screamed to stay on the swing and seemed visibly terrified of any kind of physical challenge.

But I tend to opt to trust my children rather than try and train them out of what I perceive as undesirable characteristics, like fearfulness.

Sure enough she's become much bolder in the last year, wanting to climb and jump and 'run run run!' and generally exert herself much more.

All I've done to 'encourage' her to take an interest in the bike is to ride MY bike. She's also watched Noel ride off on his bike to work every morning and seen him return home on it.

She used to ride on my bike a lot when I was pregnant with Violet and on the odd occasion I've managed to spend one-on-one time with Cherry, we've gone out on the bike together with her in her seat. She spent quite a lot of time asking to 'ride on Mummy's bicycle' and this naturally slid into 'I want to ride MY bicycle.'

For a while she just wanted to shunt it up and down the garden and would usually call me to help her turn it around. I found this a bit tedious and was tempted to just run her through the basics of bike handling, but I'm not a huge fan of explicitly 'teaching' children something they can, with time, learn themselves. So I'd turn her bike round for her, and off she'd shunt again. 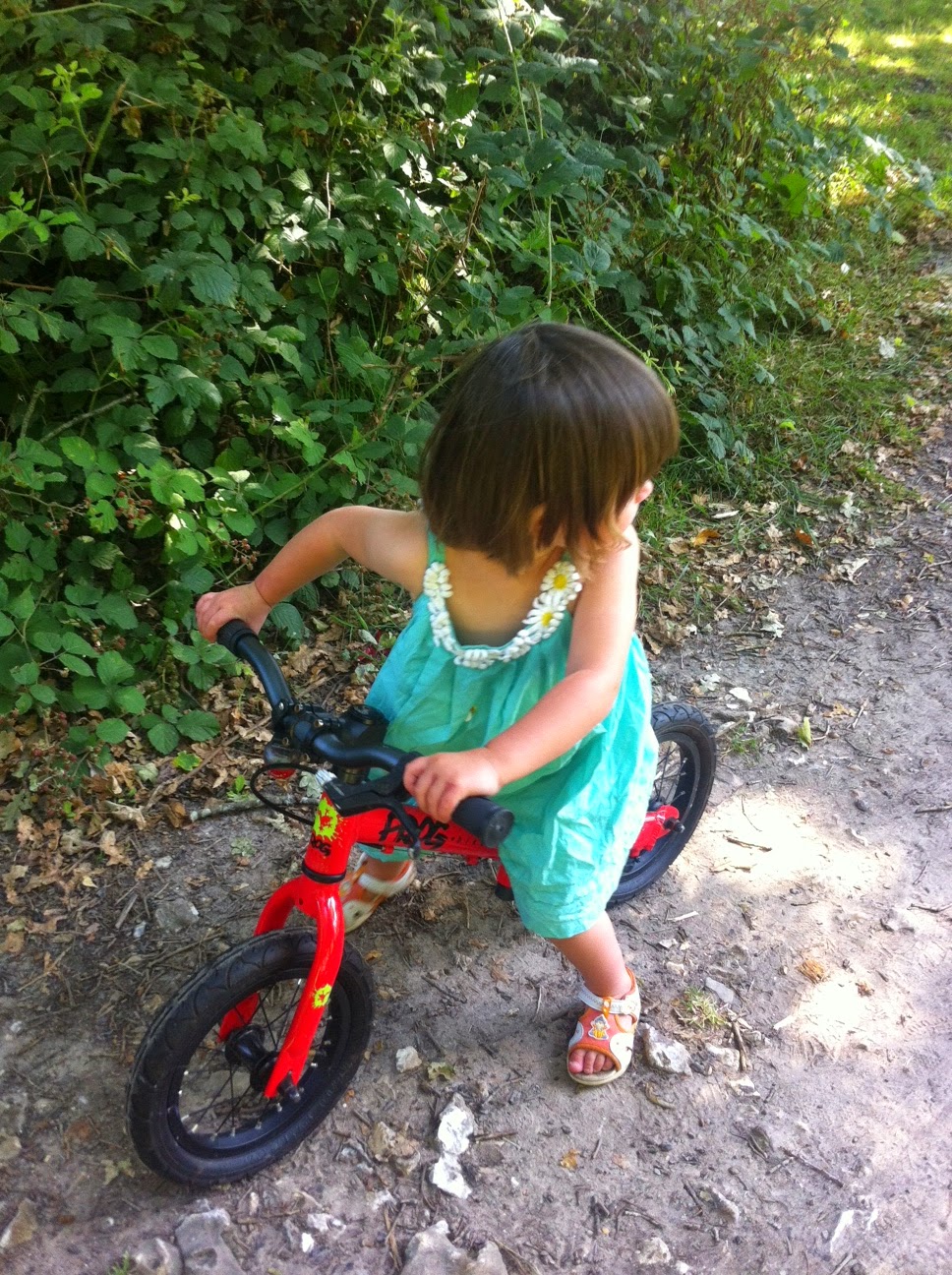 She seemed to find the agonisingly slow, unsteady process quite mesmerising after a while. Watching her was certainly mesmerising, in the same way watching paint dry is compelling. I could easily have nodded off to it.

Somehow in the last few weeks, probably while I was sleeping, she's learned to turn it herself. At her request the bicycle has become a regular feature in our daily routine. If we go out for walks, the bike comes. V naps mid-morning so this is the perfect time to pop her in the sling and take Cherry for a 'bike ride' up and down our cul-de-sac.

We don't get very far. Particularly when she insists on hopping off every ten seconds to sit on a wall 'like Humpty Dumpty' or talk to snails.

It's a long game with Cherry - with cycling, with everything. There are children out there who would undoubtedly have graduated onto a 'big boy/girl bike' with pedals by this age, and be happily whizzing about. Her younger cousin, not yet two, can already hurtle about on the Frog at high speed. Perhaps if I'd made more of an effort to 'teach' her she too would be an aficionado by now.

But that's not our way and I have time. I'm a full-time mum, what else am I going to do with my day? So we continue with our slow, stately progress. One day very soon - ages away, but very soon - she'll be hurtling ahead with me panting and puffing on my own bike, struggling to keep up. I won't have taught her to do it. She'll have learned it herself and that's something she'll have in common with no less than Sir Chris Hoy.

What could be more empowering than that? 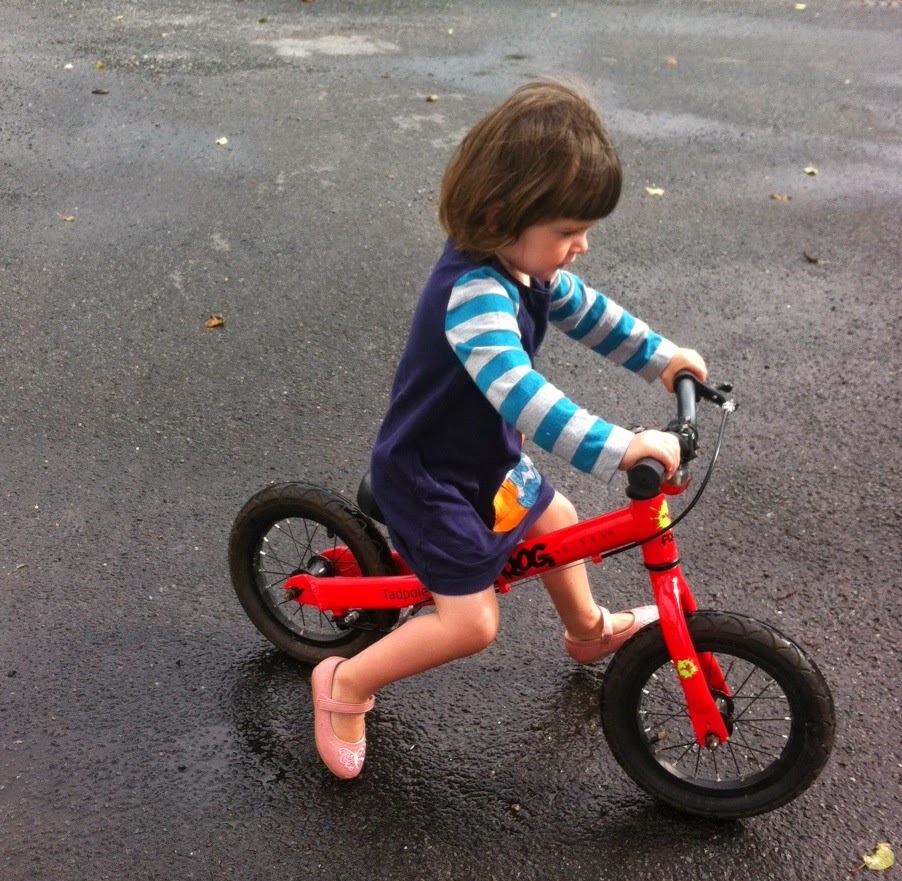 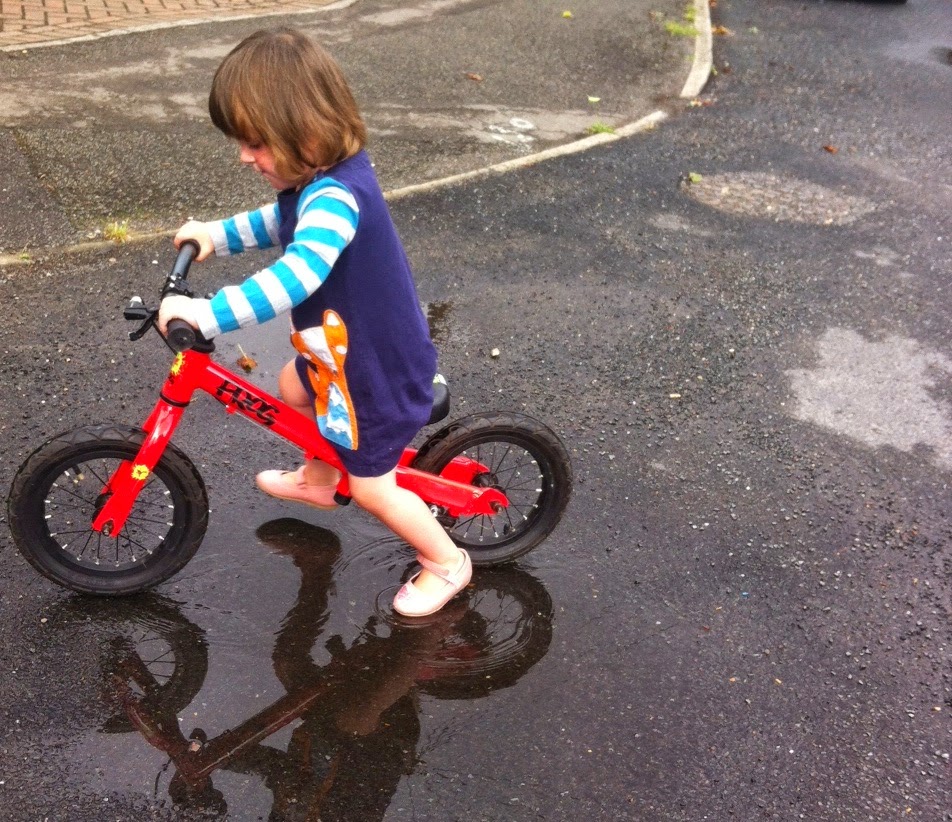