Two children and me

Every now and again I read a blog by a parent of two (or more) children about how much easier it gets. Once you're past the newborn stage/sleep regression/crawling/whatever, they claim, you suddenly realise life is getting back to normal and you're not quite as knackered and feral and dependent on Hob Nobs as you once were.

What really terrifies me is these blogs are often written by parents with second children younger than mine.

I've got to say I don't share their sentiments.

Here's my take on the first year (and a bit) with two kids. 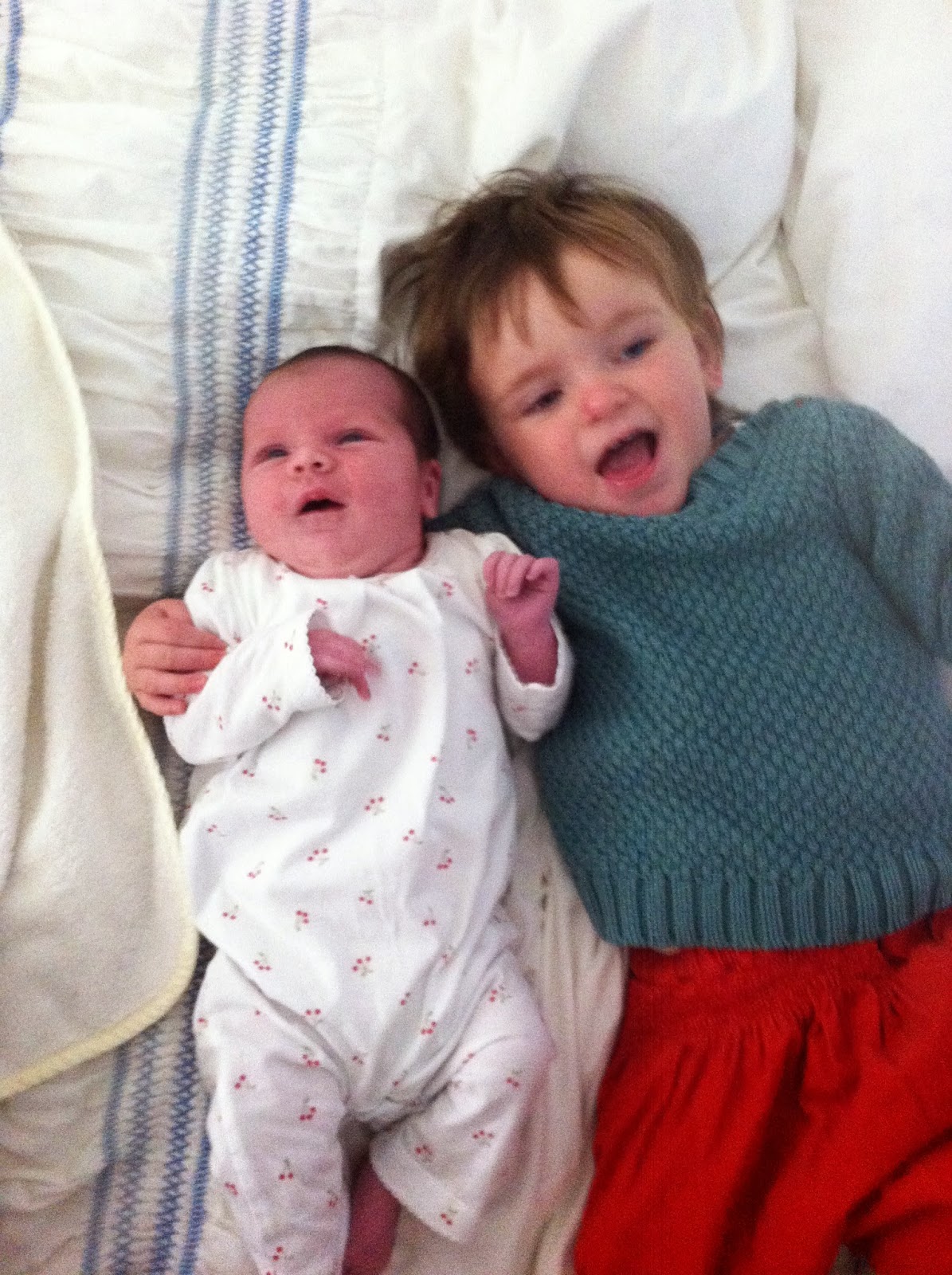 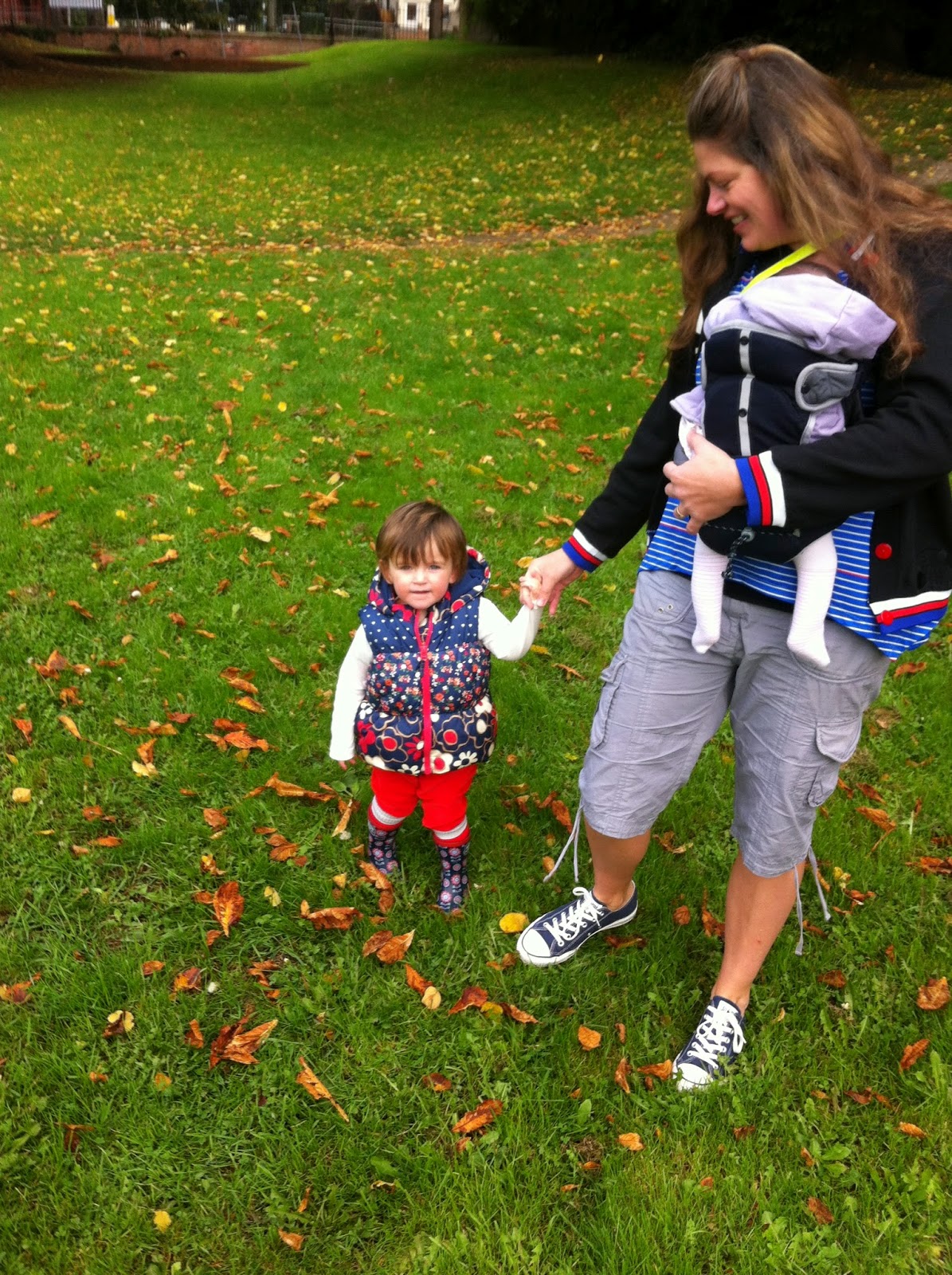 You're terrified about how you're going to cope with a toddler and a newborn but what you've forgotten is that newborns DON'T MOVE. Or talk, or do anything really, other than sleep and cuddle and eat and smile. Well, my newborn did, anyway. My main memories of this golden hazy time involve going to the park with an energetic but happy toddler and a sleeping baby in a sling. We often had lunch out, and lunch for Violet was always on me. Even with potty learning to contend with life was easy streets. I had this two kids thing totally nailed, although I was curious about what would happen when Cherry turned two not long after V hit… 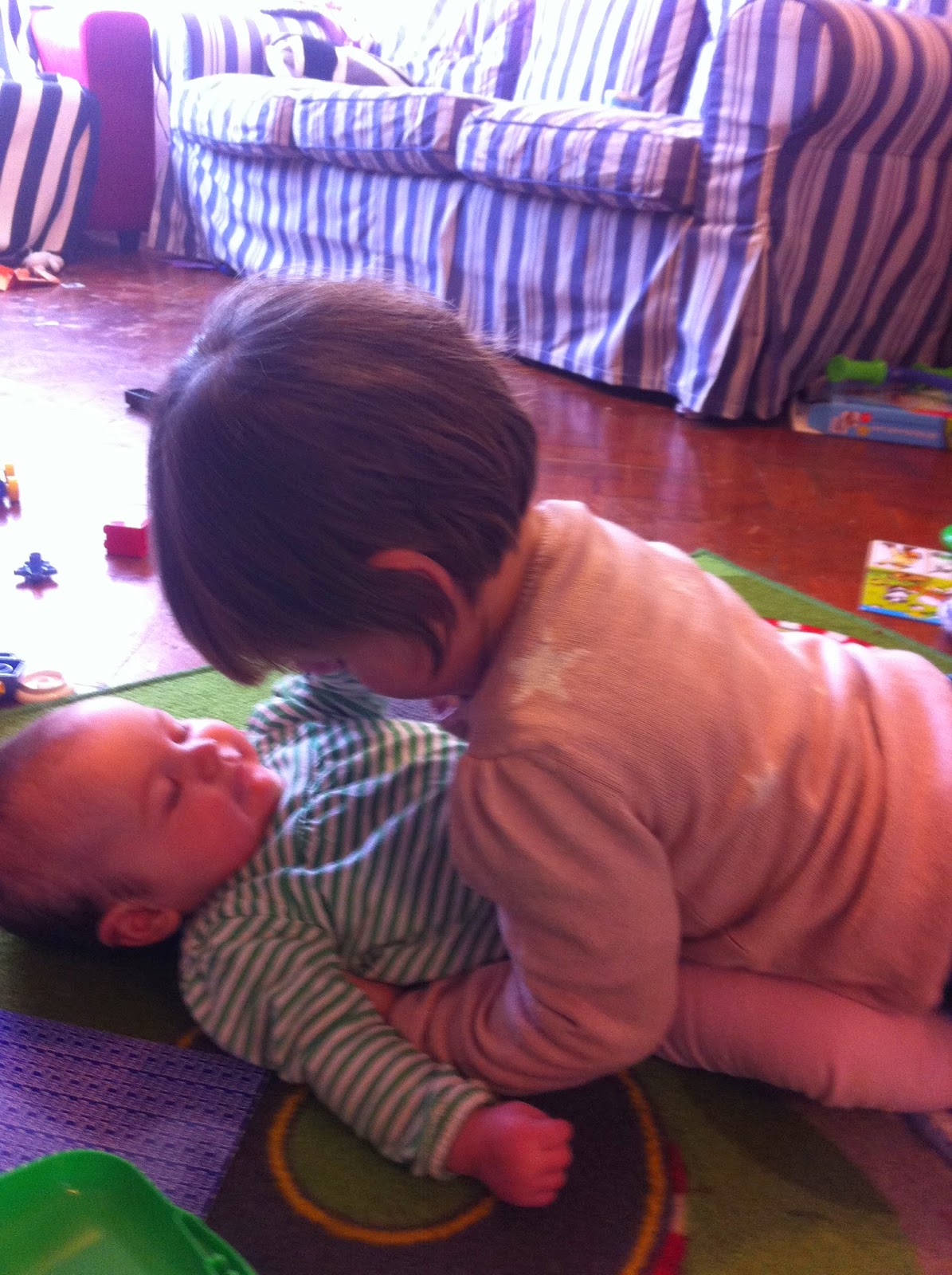 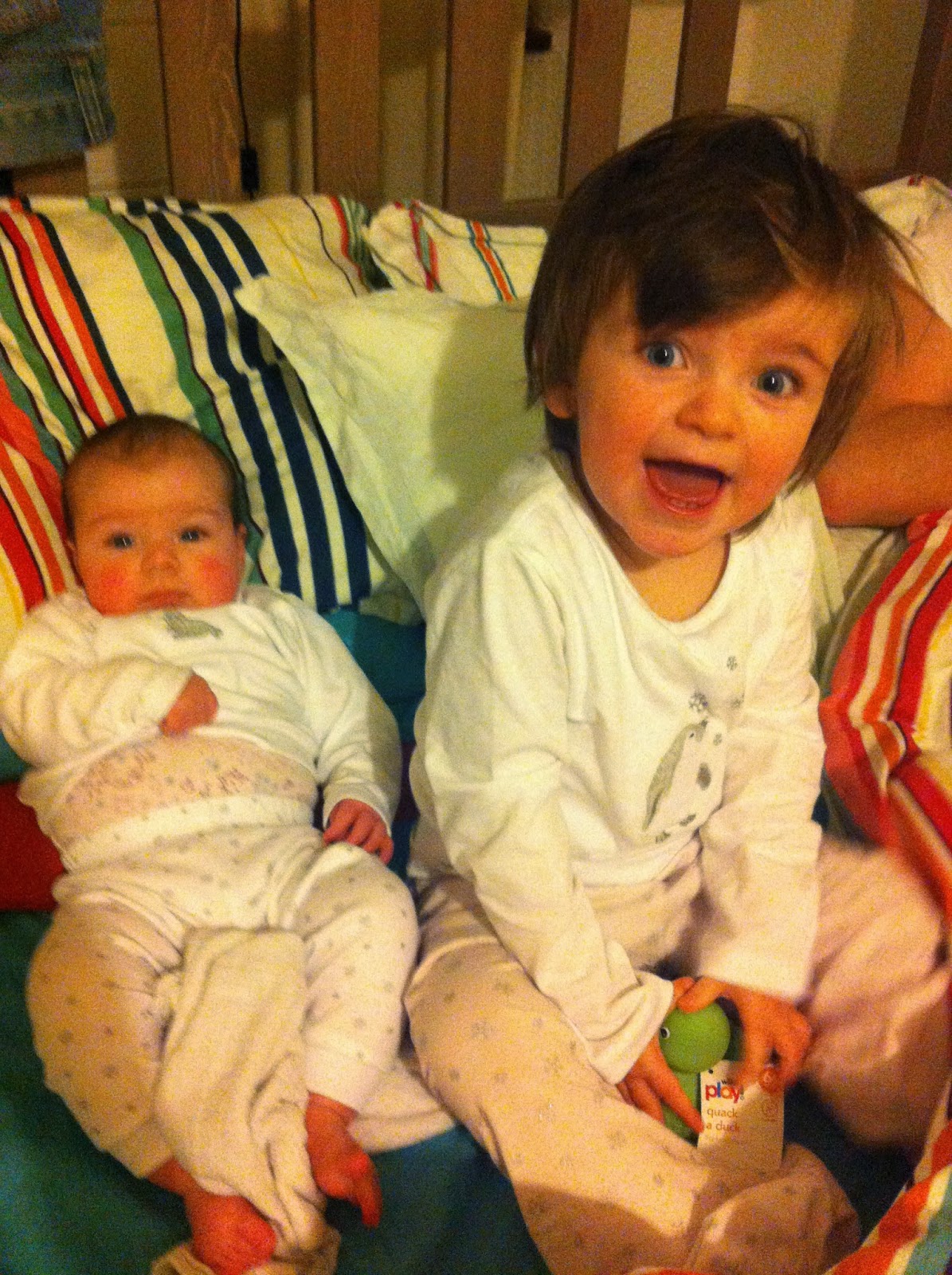 At around 12 weeks V started to show her personality, which was contented, happy, loving and cuddlesome. At around 16 weeks she started to wake a lot at night. I though this was just 4m sleep regression plus cutting her first four teeth, and I was in general pretty well rested thanks to Cherry sleeping through at night and napping 2-3 hours a day. V also didn't like being put down much but that was OK too - what are slings for, after all? Admittedly leaving the house was a bit of an effort, but other than that I still totally HAD this parenting two kids thing. 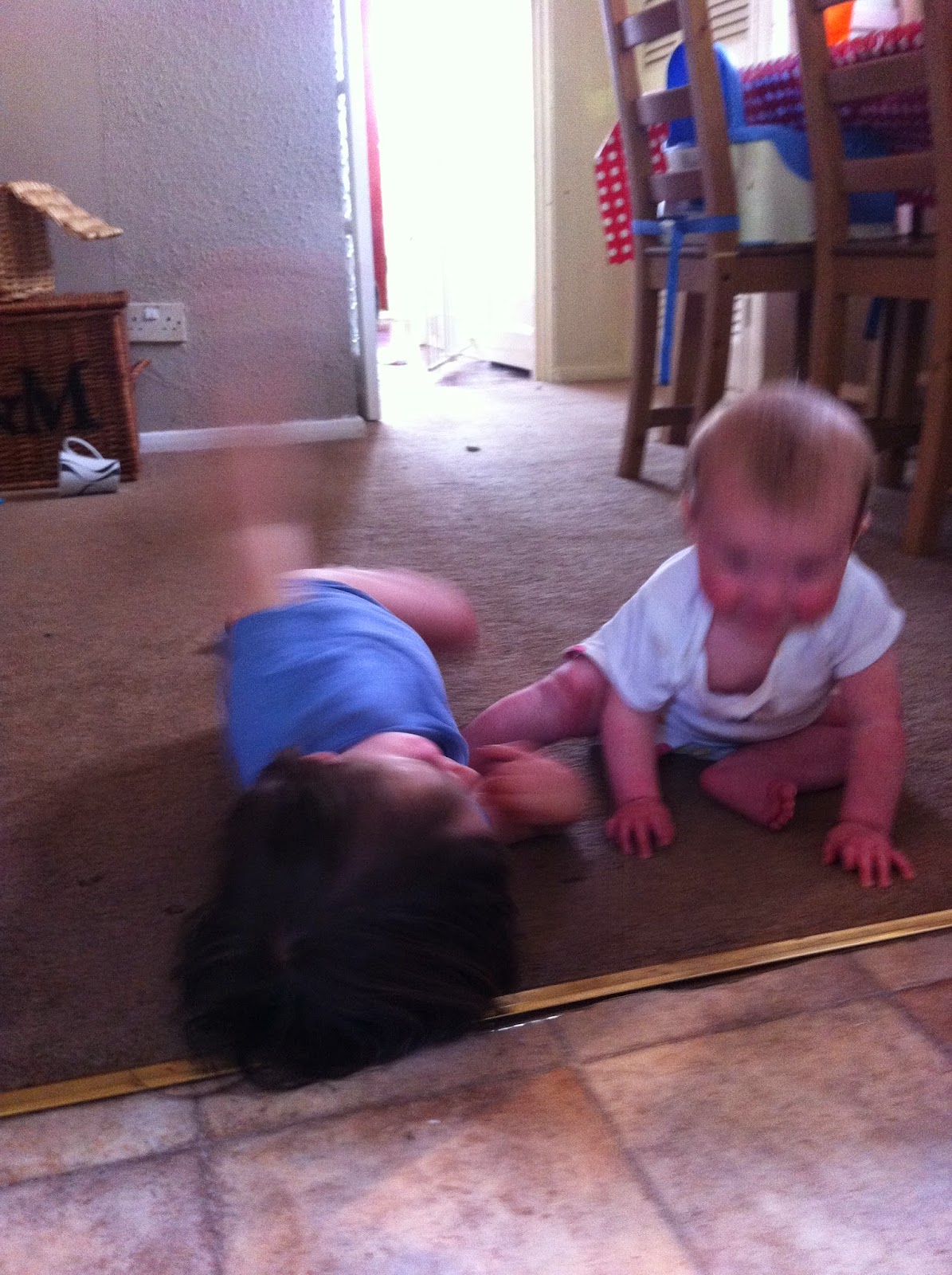 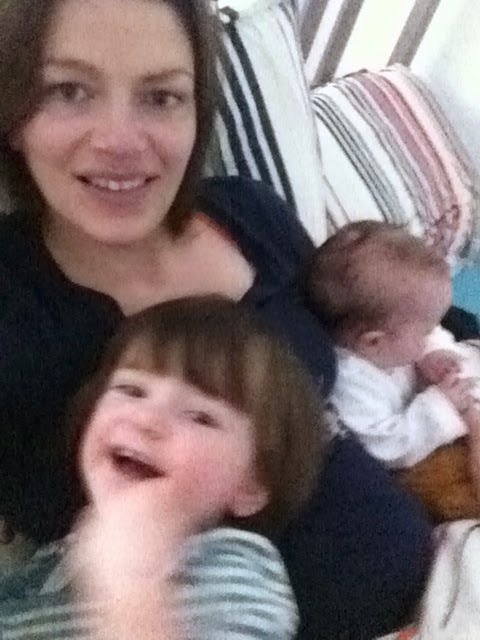 Shit, the baby's sitting up. WHEN DID THAT HAPPEN? I'm fairly certain with Cherry I practically had a day chart. I only found out V could sit up when she started doing it EVERY TIME SHE WOKE UP AT NIGHT, which is A LOT. And she's eating solid foods and I'm a baby-led weaning fan, so there's MESS EVERYWHERE, ALL THE TIME. It's all very well saying 'just leave the mess and concentrate on your children' but it's quite tricky/life-endangering navigating a floor full of Lego, puzzles, books, half-eaten apples, bits of banana, breast pads, drinks, dirty nappies, felt-tipped pens and used potties with a baby in your arms and a bare-assed toddler following you chattering nineteen to the dozen. But it's all fine, once she can crawl it'll all settle down. And once the two-year-old decides that going to bed at night isn't the end of the world. And that in general, one does have to put trousers and knickers on in order to leave the house. But it'll be fine once V is… 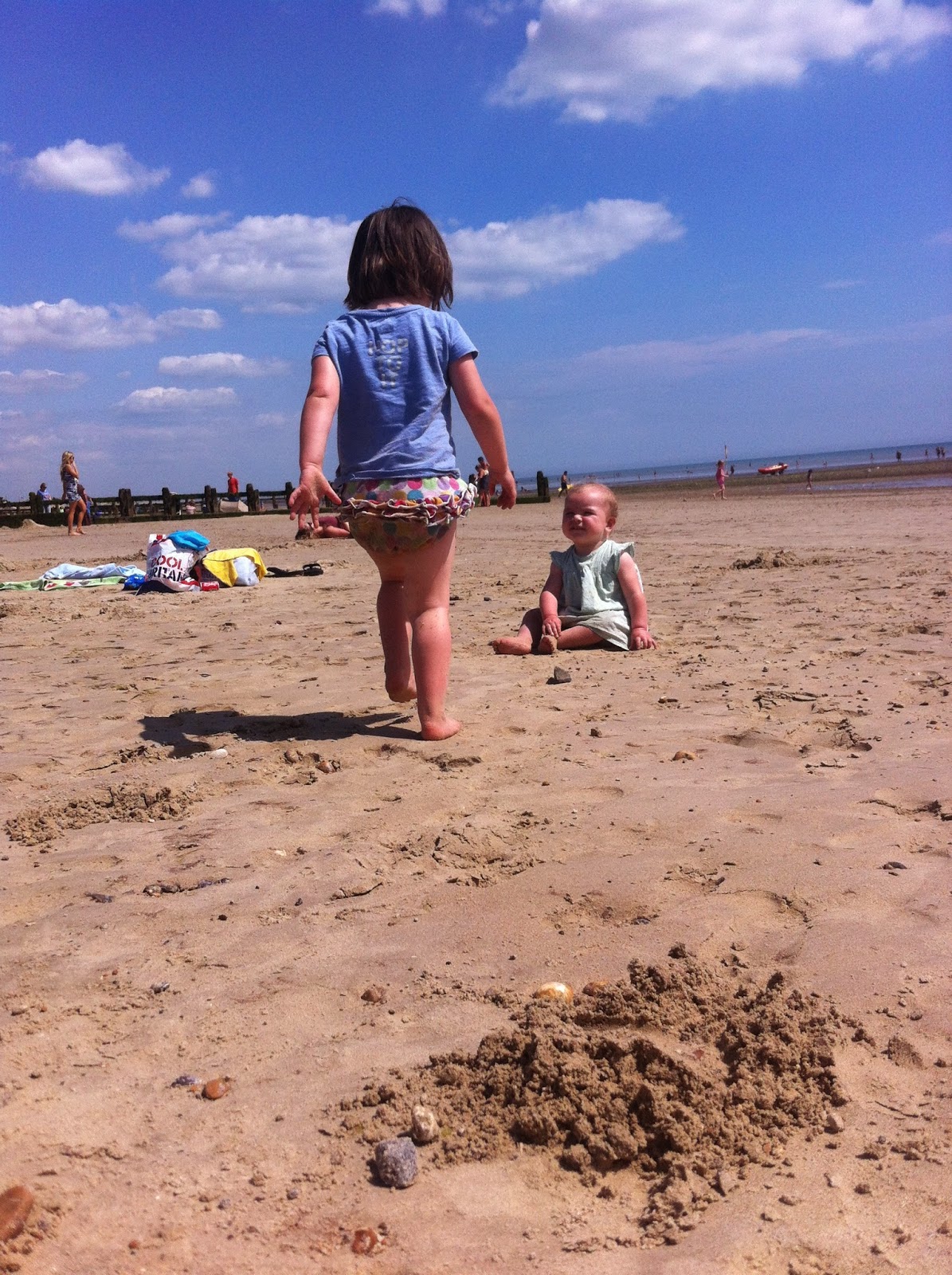 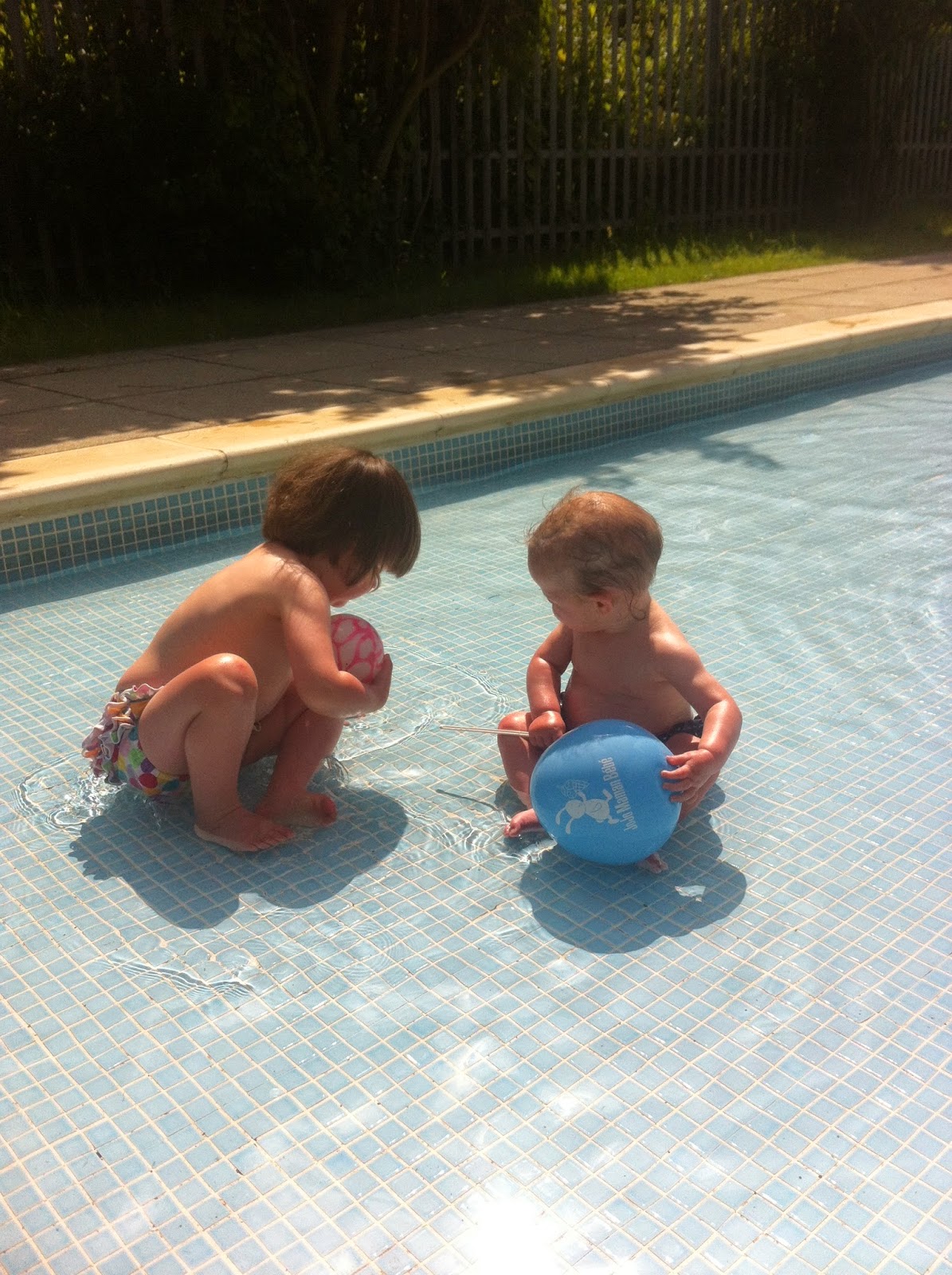 Crawling. Then standing. Then cruising. Cherry can't just go somewhere else now if V's bothering her or if she doesn't want to 'share' with her sister because V CAN FOLLOW HER. I give up any hope of V, and therefore me, ever sleeping again. The mess is unfathomable, the volume of laundry inexplicable. I repeatedly wash a pair of grey knickers that don't appear to belong to anybody at all but are apparently permanently soaked in something that could be urine, could be drool, could be tears, could be snot, most likely is all of the above and more. But that's OK because everybody knows it gets easier once the baby turns…. 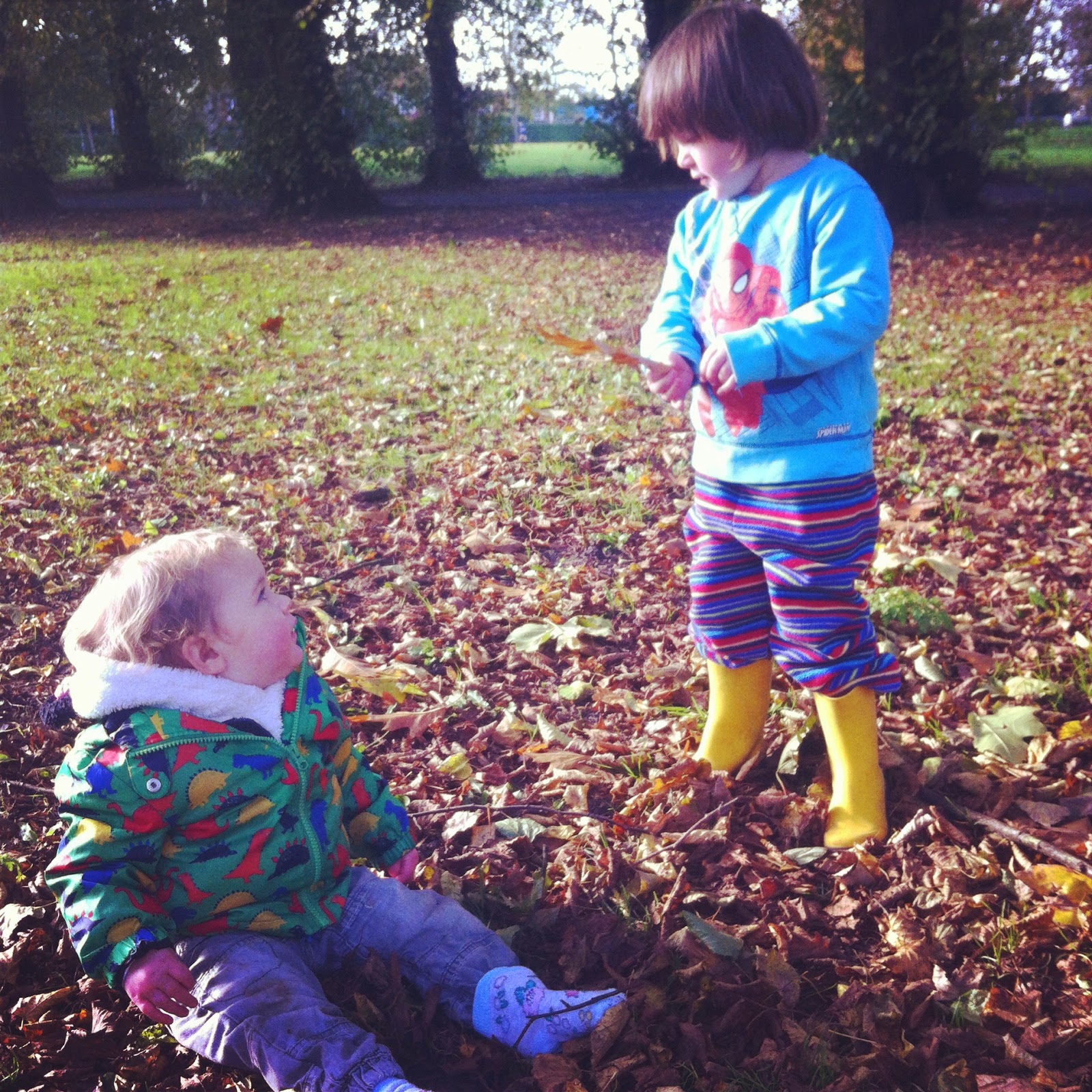 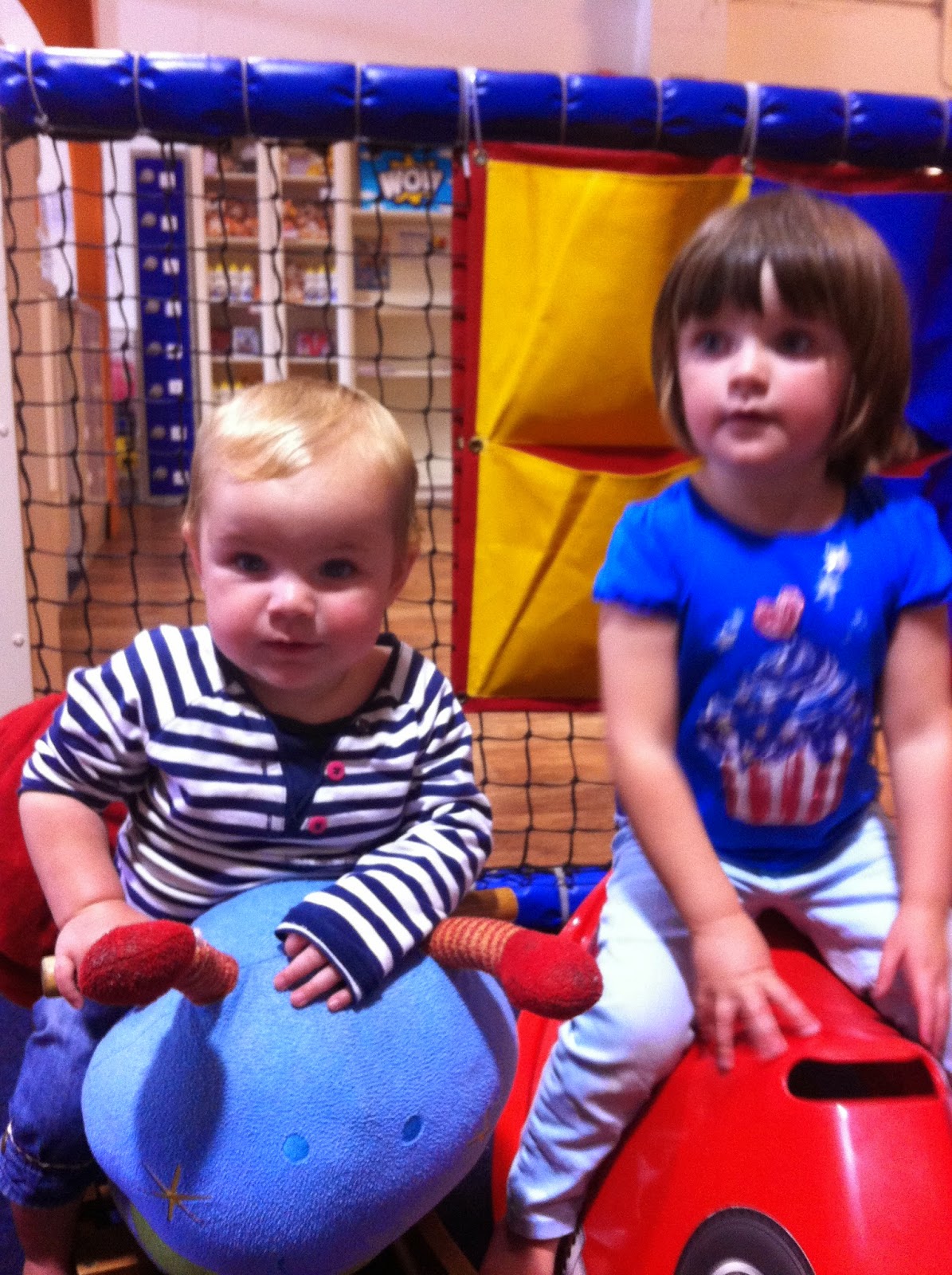 Ah, the old 'it gets easier after they turn one' chestnut. What part of having a one-year-old and two-year-old is supposed to be 'easier', though? The one-year old starting to walk and being able to talk? The four molars she cuts in three weeks? The understanding what will wind up the two-year-old and doing it, repeatedly, then running away giggling? The firing endless breastmilk into the ether because she's too busy for more than about three sucks a day, but she feeds so frequently at night you've still got the milk supply of a Jersey cow? Both of them repeatedly turning off the Hoover and giggling madly as I frantically try and avoid our home descending into the kind of filth some people would pay good money to watch on the TV? The sheer effort of getting a contrary two-year-old who doesn't want to go out then doesn't want to go home once you ARE out into the few items of clothing she will actually deign to wear, not to mention a constantly on-the-go, wriggling, squirming one-year-old who has FAR better things to do than get dressed, have her nappy changed and put on some shoes? THE TWO OR THREE HOURS SLEEP YOU GET A NIGHT?! 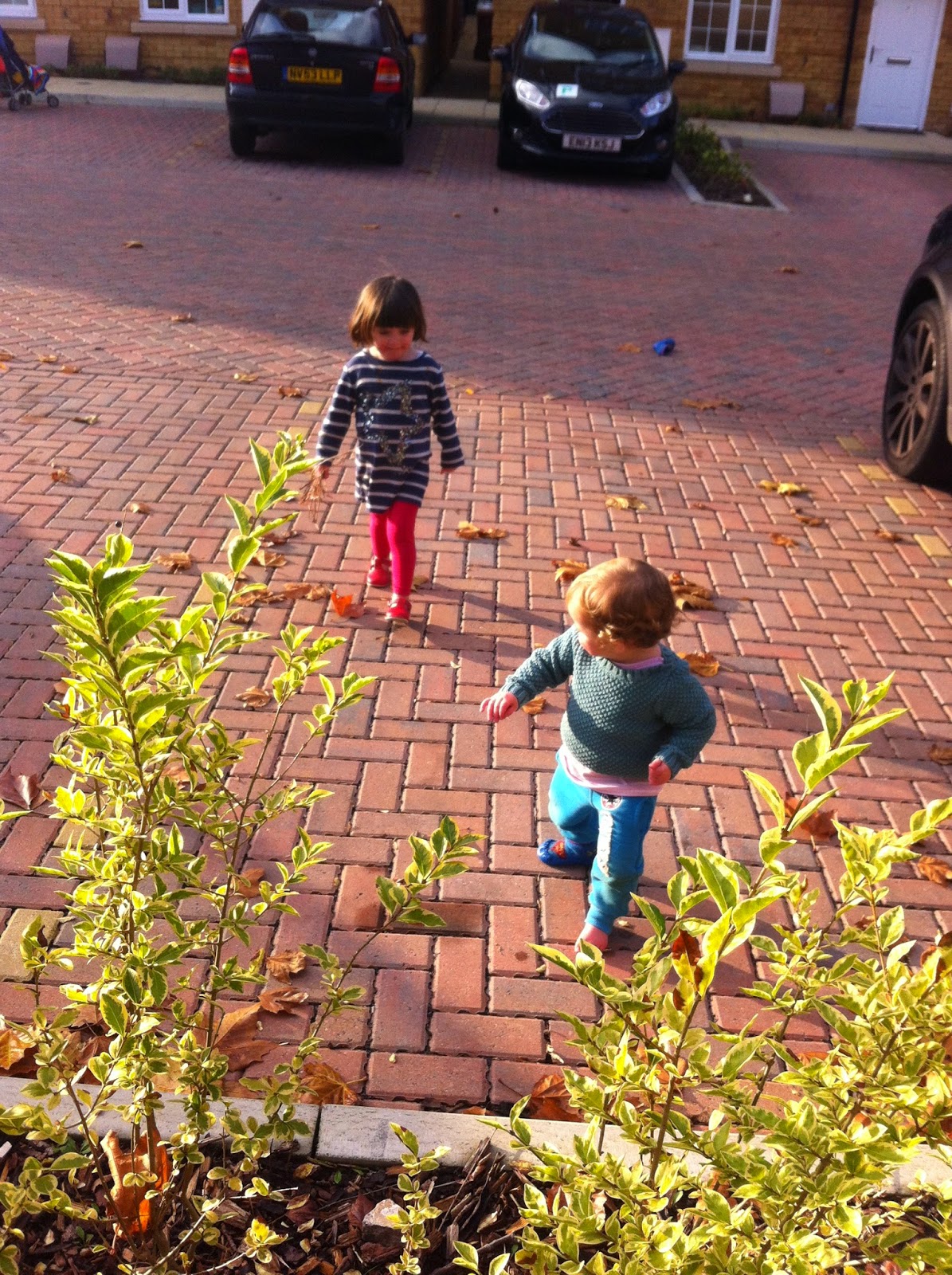 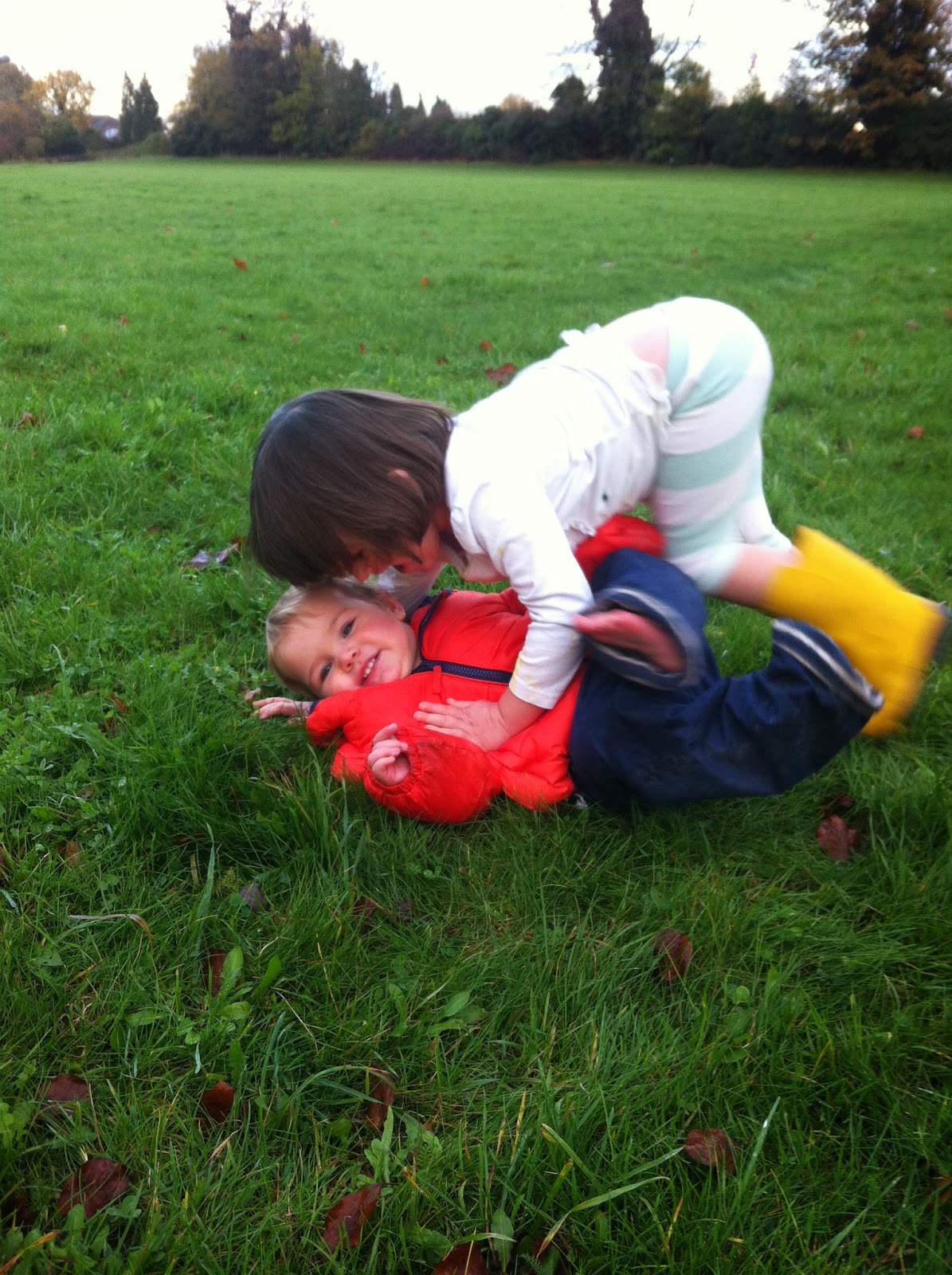 I can't comment on the rest of this stage as V is approaching 16m and Cherry is about to turn three. But the signs for it 'getting easier' aren't good. I now have two children so bursting with energy and joy and excitement that sometimes it's rather like herding puppies out of the house and watching them gambol away onto the frosty grass. I now have to field questions like 'Mummy, why is my fanny a vagina?' while the one-year-old staggers towards the dishwasher, finger outstretched, intoning 'BEEP! BEEP!', pushes all the buttons to set it on a fruitless rinse cycle, then turns and heads towards the cupboard with the battle cry 'SNACK BAR! SNACK BAR!'. I spend my days quite often laughing until I cry and, occasionally, crying until I laugh. Going ANYWHERE takes 100 years as you might have thought almost three-year-olds walk slowly, but I respectfully remind you they have nothing on almost-16-month-olds.

I now have two fully formed little people and the shoulder-busting responsibility of helping them to learn and understand how to live in the world. 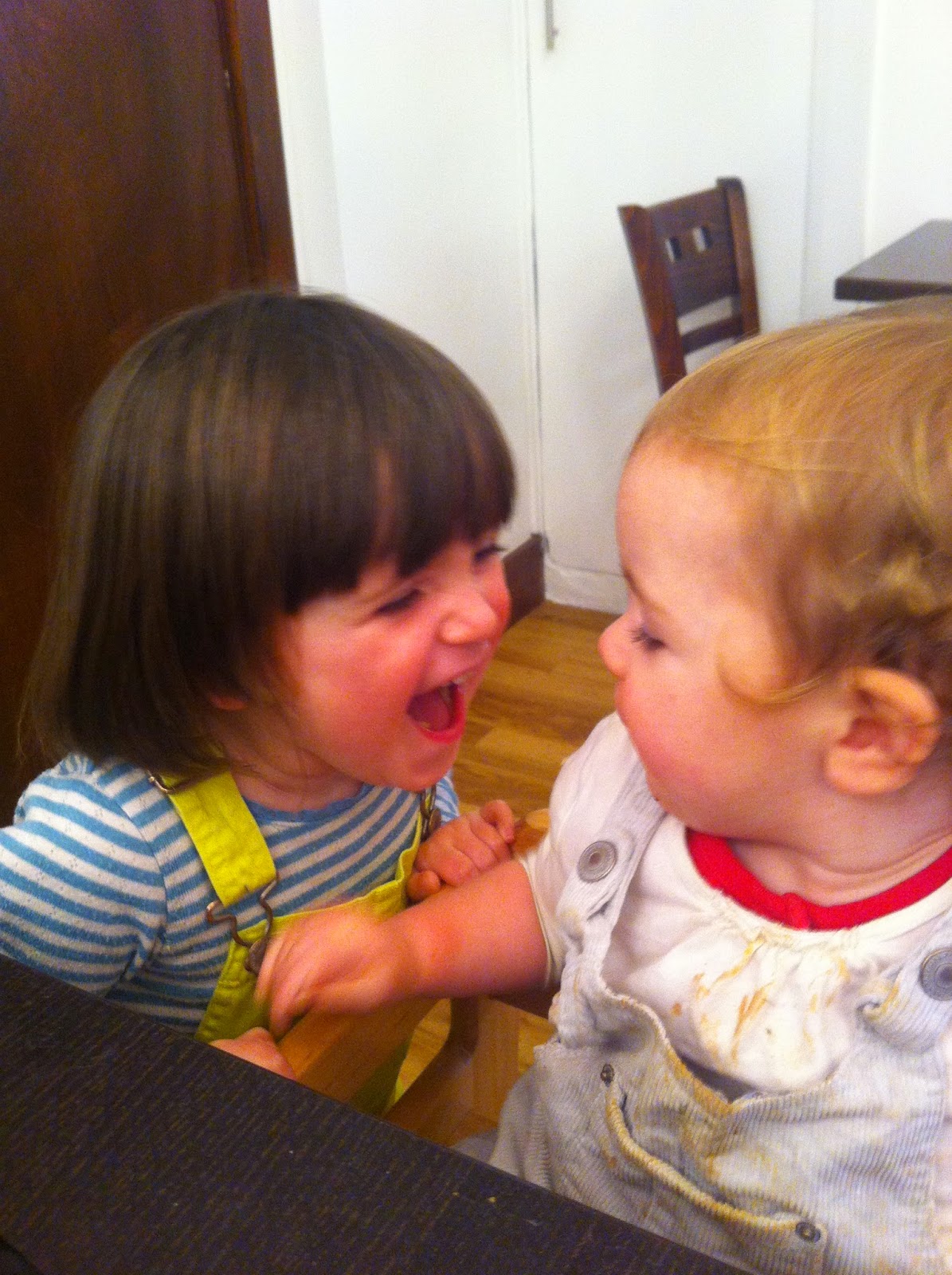 I can honestly say that for me life with two children has got harder. It's not bad hard - it's good hard, the best kind of hard. It's deeply rewarding and joyful. But it's exhausting and emotionally draining and maddening and frustrating and sloooooow and flying by in equal measure.

It could be the age gap, it could just be my choices that are making it harder, not easier. But I suppose life is about choice, and the life I want isn't necessarily what's immediate and easy for myself or my children.

Joy, happiness and fulfilment, for me, don't come from quick fixes and solutions to ages and stages dressed up as 'problems'. I decided some time ago that my career can wait, but my children can't. They will only be this young for a very short period of time, comparatively speaking. 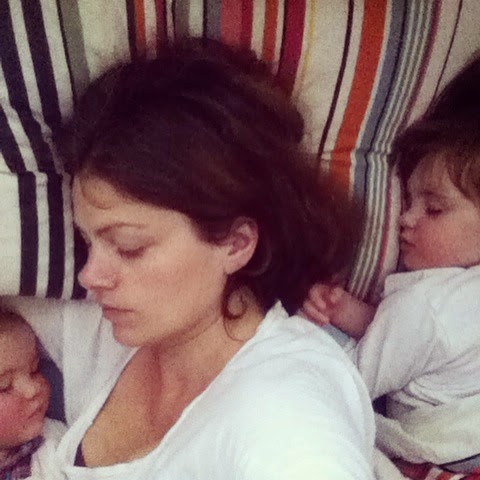